A few weeks, ago I had the pleasure of participating on the Red Team for Pacific Rim CCDC. This is my third year doing the competition, and I feel like I have more fun each year. This year, I was on the Windows Meta Team and a Red Cell Team with Lee Christensen (@tifkin_) and Andy Robbins (@_wald0).

I’ve previously written two posts about the competition, in 2015 and 2016, and don’t want to rehash the same points I’ve already covered. In this post, I will focus on the Windows Meta Team infrastructure design, Cobalt Strike Aggressor scripts, and provide some tips for the Blues.

While designing the Windows Meta Team’s infrastructure, we considered the response we’d expect from the Blue Teams. Typically, Blue Teams seem to block and move on. I personally haven’t seen much in the way of backend investigation response, which makes sense given the speed of the competition. During the competition, each team (Blue or otherwise) is assigned one or more IP subnets from which to operate. As such, Blue teams usually figure out Red Team ranges and respond to that traffic differently.

Focusing on those design points, we wanted to build an infrastructure that can blend in on a noisy environment that could withstand liberal defensive egress filtering. Since we didn’t anticipate intensive defensive investigation into our infrastructure or any “hacking back,” we didn’t see the need for redirectors or intense security controls beyond typical host hardening and iptables. Here’s what we settled on: 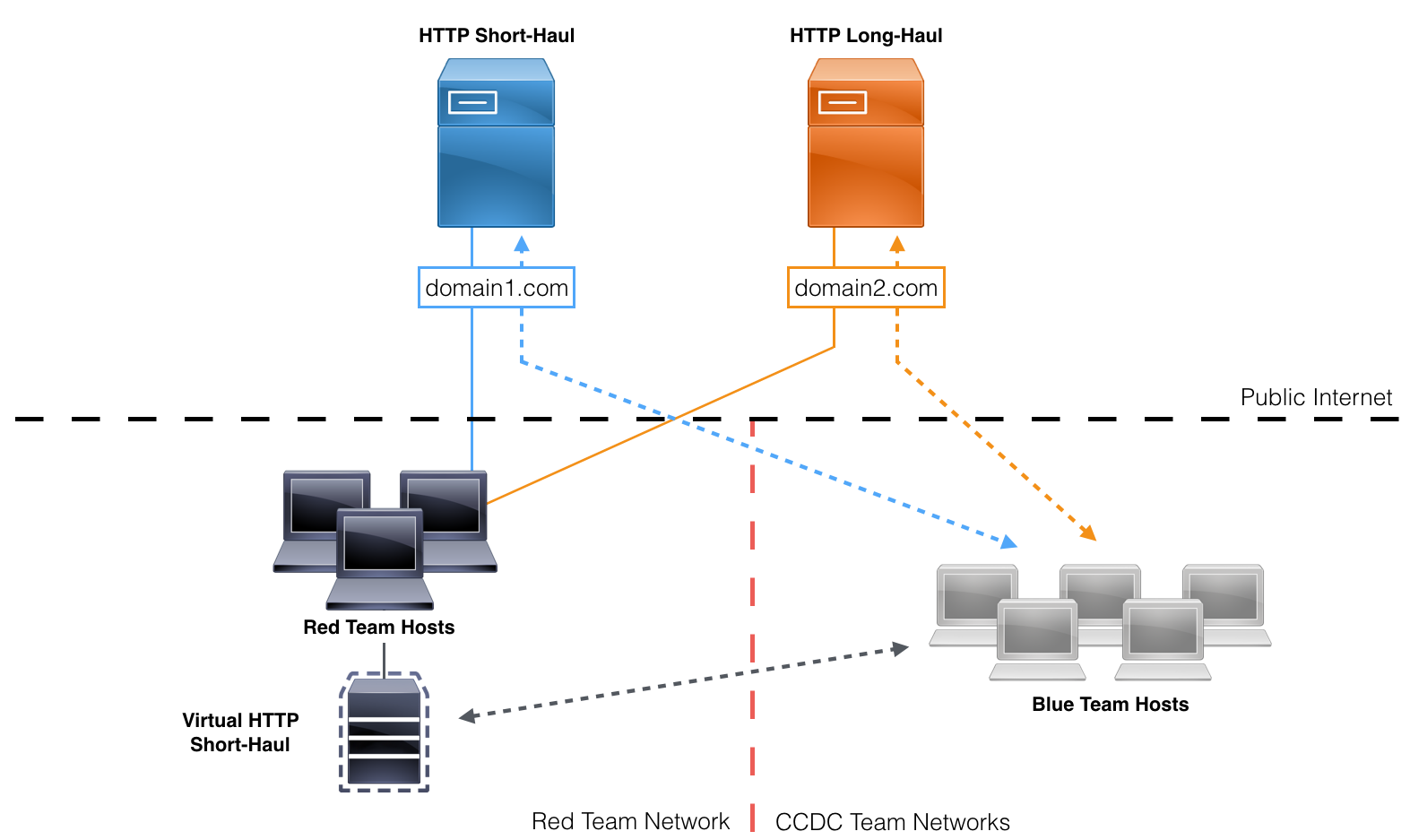 The long-haul teamserver’s sole purpose was to act as a last resort to regain access to networks that lost all other access. All primary post-exploitation actions would be done over one of the two short-haul servers. One of the short-haul servers and the long-haul server were hosted remotely on a cloud VPS host. A unique, CCDC-related domain was placed in front of each of the two remote servers to help externally-routed traffic blend in on target networks. Later in the competition, a second local short-haul teamserver (not pictured above) was stood up to provide an alternate teamserver in case of blocking.

Sidebar tip: Add entries for each teamserver to your local /etc/hosts file to easily keep teamservers straight if you need to roll their IPs.

For more about distributed red team infrastructure design, check out:

Being on the CCDC Meta Team means dealing with 100+ sessions at any given point. Even the simplest commands can take a long time to run across that many Beacons. So, if automating a task will save even a little time per Beacon, it’s worth automating for CCDC. Luckily, Cobalt Strike provides a built-in scripting language: Aggressor. There are numerous resources out there, including great official documentation, so this post won’t cover Aggressor basics. Rather, here are three specific scripts we found useful:

This first script is based on the post Creeping on Users with WMI Events: Introducing PowerLurk by Andrew Luke (@Sw4mp_f0x). The script uses PowerLurk to register multiple permanent WMI event subscriptions that monitor for the following processes:

When any of these processes are found, the WMI event subscription will kill the identified process. We deployed this a few times during the competition and, based on the outbrief, it was highly effective in frustrating the Blue Teams.

The script itself loads the PS1 file of PowerLurk and then executes one PowerShell command per blocked process name, like so:

Here’s a demo of the script in action:

The next script is designed to perform DCSync en masse. In Cobalt Strike, you must specify one username per DCSync command, which is better tradecraft for a real-world engagement than mass dumping creds from a domain controller. Since CCDC is the wild west, why not throw caution to the wind and just extract everything?

The script uses Cobalt Strike’s new Custom Dialog API to create a dialog that prompts for the target’s fully-qualified domain name, the domain shortname, and a file containing a line-separated list of usernames to DCSync from the domain controller.

The GUI callback lambda returns the output in $3 as a hashtable. Here’s the content of $3 from this script:

Using the provided data, we can build the rest of the script:

This code reads the contents of the provided file, $3['userlist'], into an array, loops through each Beacon ID, and runs DCSync on each username in the target user array.

For more on DCSync and its detection, check out Sean Metcalf’s (@PyroTek3) post Mimikatz DCSync Usage, Exploitation, and Detection.

The Windows Meta Team made heavy use of Kerberos Silver Tickets for persistence and pivoting this year. In short, Silver Tickets are issued to a user to authenticate the user to a specific service on a target system. That means we’ll need to create a new Silver Ticket for each service and host we want to compromise; however, Silver Tickets provide a few benefits over Golden Tickets:

Here’s an example of generating a silver ticket in Cobalt Strike with mimikatz:

Here’s a breakdown of the required parameters:

During the competition, I hardcoded every machine hash for the top few services we anticipated needing. A condensed version of that script would look something like this:

Though cumbersome, it worked for the competition. Handling Silver Ticket generation in that manner wouldn’t work well for future competitions or in the wild, so I have since written a better script to automate the process and keep track of compromised machine hashes. The source is on GitHub here.

The script monitors Beacon output for machine hashes and adds them to the credential store when found. It also adds a context menu to generate the script that mirrors the Golden Ticket functionality built into Cobalt Strike. The Silver Ticket generator provides a prompt for required data and presents a drop-down containing all compromised machine account hashes. Now there’s no need to manually track compromised hosts and their machine account hashes!

CCDC is rough. Blue Teams go through two days of chaos, but there is a lot of value to be gained from the experience.

Here are a few tips from my Red perspective:

CCDC season has come and gone again, too quickly. This year my personal focus was to continue automating post-exploitation and persistence with Aggressor and to minimize the risks of being outright blocked by Blue Team defenses. Onsite, I got a good deal of experience working with Silver Tickets, and they are FUN. I can’t wait for next year.

If the competition sounds fun, or at least interesting, get involved! Reach out to your local regional director for volunteer information.

If you’d like to check out some of the scripts I used at CCDC, they are located on GitHub here: