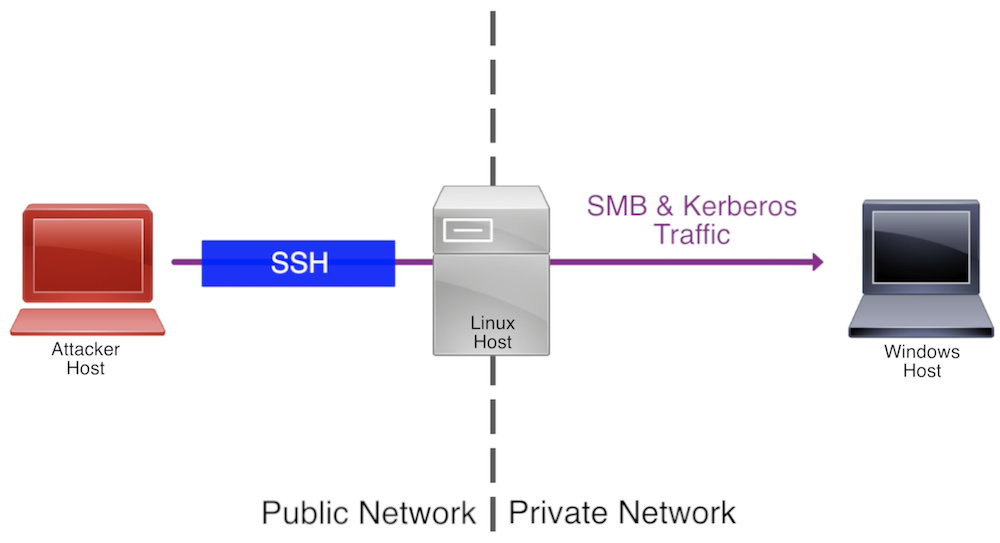 The Pass the Ticket (PtT) attack method uses a Kerberos ticket in place of a plaintext password or NTLM hash. Probably the most common uses of PtT are using Golden and Silver Tickets. Gaining access to a host via PtT is fairly straightforward; however, performing it through an SSH tunnel is more complex.

At this year’s Pacific Rim CCDC, my fellow Red Teamers and I ran into a situation where we had the target’s krbtgt and machine account NTLM hashes and had unprivileged SSH access to one Linux host on the DMZ with internal network connectivity, but we had no direct access to any Windows hosts.

You may encounter a similar situation on production networks when trying to compromise sensitive hosts in segmented portions of the network. This post covers how to pass Golden and Silver Tickets through an SSH tunnel. As an example in this post, we’ll be trying to compromise the Windows host WIN-RMJBTDB7QTF through the Linux host located at 10.0.10.81.

Big thanks to Alberto Solino (@agsolino) and everyone involved in Impacket’s development and Benjamin Delpy (@gentilkiwi), Chris Gates (@carnal0wnage), and MWR Labs (@mwrlabs) for writing these resources:

This attack requires a Linux host with the Impacket Library and proxychains installed. The host doesn’t need to be domain joined.

To create a Golden Ticket, we need to have the following information from the target domain:

We will use Impacket’s example script ticketer.py to create the Golden Ticket credential cache (ccache) file. Here is an example of the syntax to create the ccache file for the user mbrody-da:

To enable the Impacket example scripts to use the ccache file for authentication, rather than provided plaintext passwords or NT hashes, we need to set the KRB5CCNAME variable to the absolute path of our ccache file:

Verify the variable was set correctly:

Now we can use the -k flag with any Impacket script that supports Kerberos authentication to use the Golden Ticket rather than providing plaintext passwords or NT hashes.

To ensure the Kerberos process functions, we need to modify the /etc/hosts file of our attacker machine to include entries for the FQDN of the target’s domain controller and the target host’s NetBIOS name. Here is an example:

If you don’t already have the IP address of the domain controller, run nslookup on the target domain’s FQDN via the SSH session on the target’s Linux host. For example:

We’ll be using proxychains to route our traffic over the SSH tunnel. Verify the proxychains port by reviewing the last line of the configuration file, /etc/proxychains.conf by default on Kali.

Note: You may need to comment the proxy_dns setting in the proxychains configuration file if you are receiving name resolution issues when performing the attack.

When we SSH into the target’s Linux host, we’ll provide the -D flag with the proxychains port. This will create a SOCKS proxy on our localhost’s port that proxychains will route traffic through. For example:

To validate that the tunnel is set up properly, we can run an nmap TCP connect scan with proxychains against port 445 of the target host:

Golden Ticket authentication won’t work properly if the attacking machine’s time is more than approximately five minutes off from the target domain’s DC. We can use net time to check the target’s time (line 1 below) and set the time on our attacker machine (line 2) if the delta exceeds five minutes:

With all the pieces in place, we can use any tool that supports ccache authentication to attack the target host. One such tool is Impacket’s psexec.py example script. Running the following command will return an interactive CMD prompt:

If you receive errors on launch, review the configuration of the dependencies and troubleshoot with psexec.py’s -debug flag.

Silver Tickets (forged TGS tickets) authenticate a user to a service running on a host and provides attackers with stealth and persistence options not provided by Golden Tickets. For more information about Silver Tickets and their benefits, check out Sean Metcalf’s post How Attackers Use Kerberos Silver Tickets to Exploit Systems.

This attack requires a Linux host with the Impacket Library and proxychains installed and a Windows host with Mimikatz and Kekeo installed. Neither host needs to be domain joined.

To generate a Silver Ticket, we’ll need the following information:

In this example, we’ll be authenticating to the target host over SMB, so we will use the CIFS service. Sean Metcalf maintains a list of common SPNs, which can be used in Silver Tickets, here.

At the time of writing, ticketer.py doesn’t support Silver Ticket generation. Instead, we’ll use Mimikatz on our Windows host to create a Silver Ticket .kirbi file and use Kekeo to convert the ticket to a ccache file.

Here’s an example to create a ticket for user mbrody-da and the CIFS service:

Exit Mimikatz and launch Kekeo. Convert the kirbi file to a ccache file with the following syntax:

You can convert multiple kirbi tickets with this syntax:

Copy the ccache file Kekeo output to the attacking Linux host. Make sure to note the file’s absolute path on the Linux host; we will need it to set the KRB5CCNAME variable. The rest of the attack uses our Linux host.

The remaining Silver Ticket attack setup is largely similar to that of the Golden Ticket attack, with two exceptions.

The second difference is that we will need to sync our attacking machine’s time with the target host; Silver Tickets don’t communicate with the target’s domain controller.

Follow the same steps as the Golden Ticket attack above to set the KRB5CCNAME variable, validate the proxychains configuration, establish the SSH tunnel with SOCKS proxy, and validate the tunnel with nmap.

We can now launch the attack with psexec.py against the FQDN of the target host:

This video demonstrates both methodologies described above:

Golden and Silver Tickets provide persistence and stealth techniques for attackers, but require forward connectivity to the target host to do so. An attacker may find themselves in a position where they possess the needed trust material, but can only reach a target host indirectly through a Linux host. In those scenarios, it is possible to perform the Pass the Ticket attack through an SSH tunnel via proxychains. While this post covered using psexec.py to launch the attack against the target host, any Impacket script that supports the -k argument will work, including atexec.py, smbclient.py, smbexec.py, and wmiexec.py.