Tester flexibility and the ability to adapt to each environment’s unique controls and technologies is critical on assessments. Achieving an assessment’s objective often requires the use of multiple toolsets. Justin Warner (@sixdub) wrote about the importance of tool diversity in his post Empire & Tool Diversity: Integration is Key. Two toolsets I frequently use are Cobalt Strike and Empire. Sometimes, an assessment requires migrating from one toolset to another for a specific task or, worse, if incident responders block your primary toolset. Currently, the most efficient way to pass sessions from one toolset to another is to use an existing session to run a payload for the target toolset. For example, passing a Beacon to Empire requires the tester to start an Empire listener, generate a launcher, and paste the code in each session to be passed. While this process isn’t inherently difficult, it is Manual session passing with Cobalt Strike and Empire is a tedious process andthat can interrupt a flow during post-exploitation, where efficiency is paramount. This post introduces beaconpire.cna - a script to help increase interoperability efficiency.

Beaconpire uses Beacon functionality and Empire’s RESTful API to manage Empire listeners and pass sessions between the toolsets, all from within Cobalt Strike. Beaconpire is written in Sleep and Aggressor Script and is entirely self-contained - no third party JSON scripts/libraries are required. Interacting with the RESTful API requires curl to be installed on the teamserver. Beaconpire currently supports the latest update in the master Empire branch. Empire 2.0 support is planned for the future.

A big thanks to Will Schroeder (@harmj0y) for his awesome veil_evasion.cna script. I borrowed heavily from that script to make Beaconpire.

To set up Beaconpire, load the beaconpire.cna script on your Cobalt Strike and start Empire’s RESTful API server with ./empire --rest. Copy the authentication token Empire outputs and paste it into the Beaconpire -> Configure Server menu in Cobalt Strike. Modify the server’s IP and port to point to your Empire server and click Save. 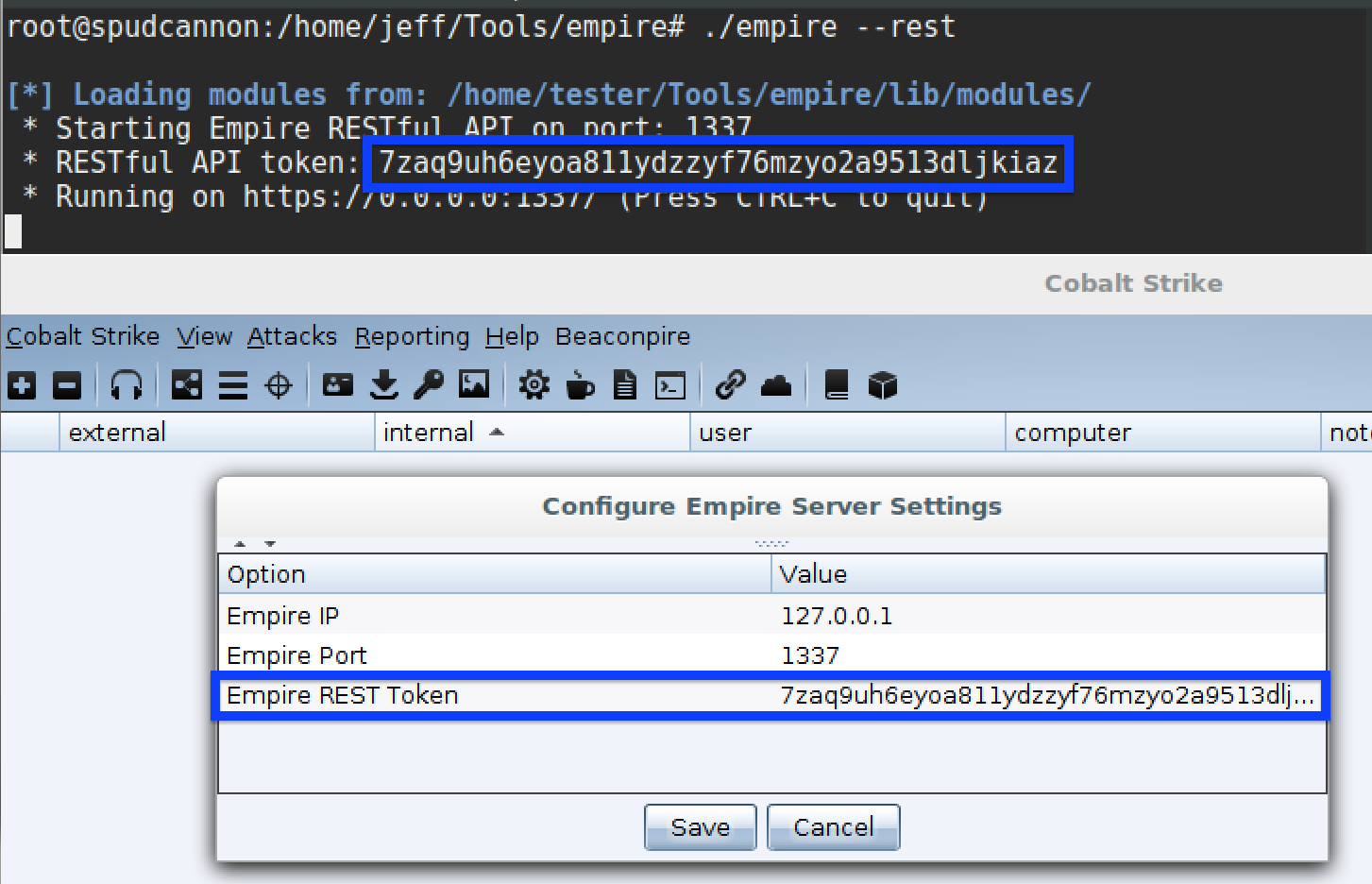 Beaconpire can add and remove listeners on your Empire server. Open the listener management prompt with Beaconpire -> Configure Empire Listeners. The create listener prompt pulls current listener settings from Empire and presents a menu to modify settings as needed. Enter settings just as you would in an Empire prompt.

The first option is a batch session passing menu, accessed via the Beaconpire -> Send Beacons to Empire menu. The prompt presents a list of active Beacon sessions. Select one or multiple Beacons, click Select Beacon(s), and select an Empire listener to which we will send the Beacon. Cobalt Strike pulls the one-line launcher stager, usestager launcher, from Empire and runs that PowerShell command in the selected session(s).

The second option to send a Beacon session to Empire is by selecting one or more Beacon sessions in the sessions table, right click, and select Send to Empire. Cobalt Strike will prompt for an Empire listener selection, similar to the batch session passing menu, and run the launcher command in the selected session(s).

Beaconpire also provides the Beacon alias sendtoempire to quickly pass the current Beacon session to Empire. The alias does not require any parameters and will prompt for an Empire listener.

It should be noted that Beaconpire currently uses the Empire PowerShell launcher, usestager launcher, which presents OPSEC concerns in environments with commandline auditing or process auditing in place. 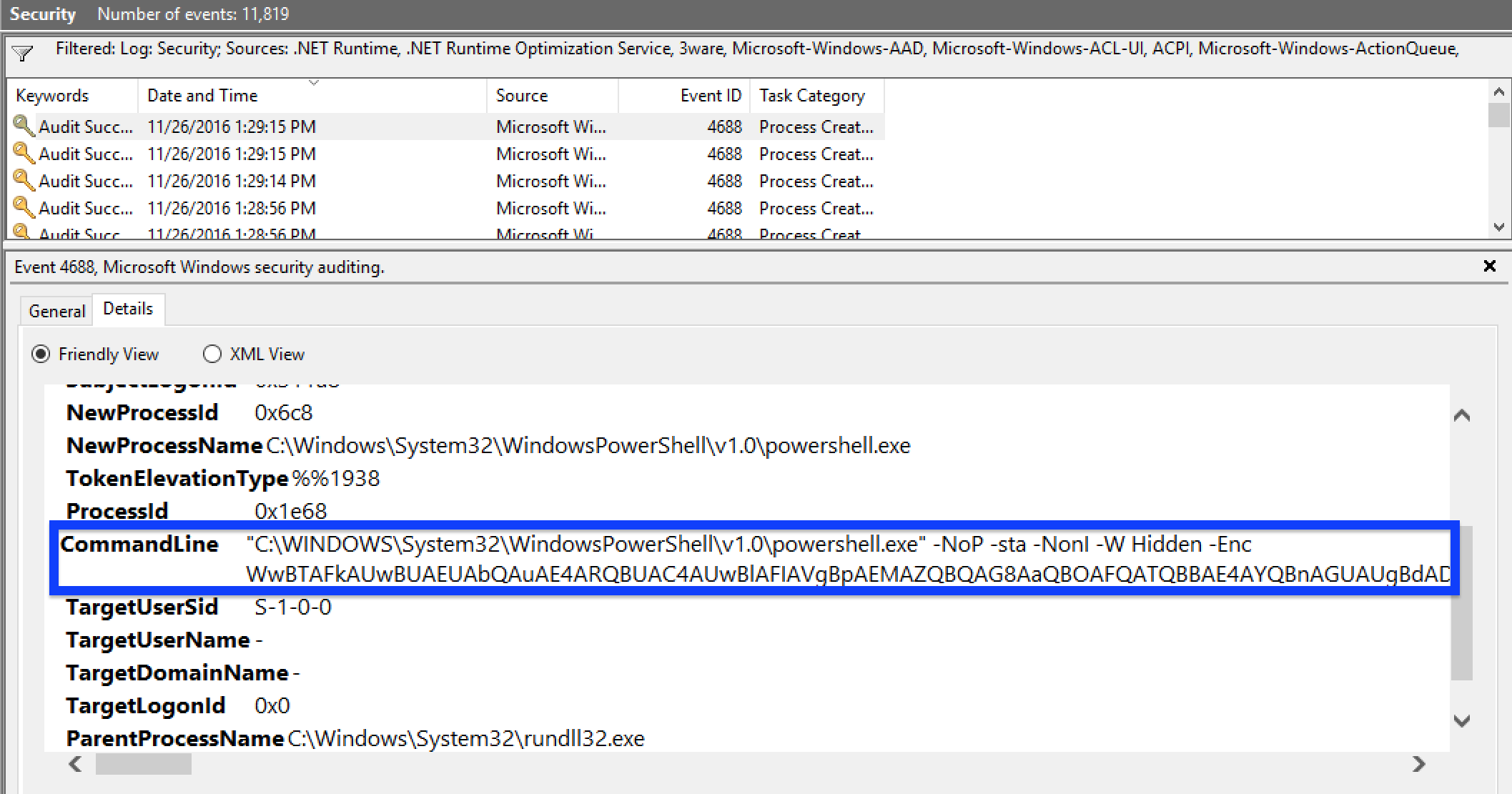 If you are operating in an environment with those controls in place, it’s recommended that you avoid using Beaconpire’s Beacon to Empire passing and opt to use a more covert manual method, such as PowerPick or DLL Injection.

Pull sessions into Cobalt Strike from Empire with the Beaconpire -> Pull in Empire Agents menu. The prompt presents a list of active Empire agents. Select one or more of the agents, click Select Agents (or choose Select ALL Agents), and select a Beacon listener from the next prompt. Beaconpire will check Empire for an active foreign listener with settings matching the selected Beacon listener. If no Empire listener is present, Beaconpire will create the listener and run invoke_shellcode on the selected Agents.

The following features are on the roadmap for future updates:

Beaconpire was designed to provide Cobalt Strike users basic interoperability with Empire. There are no plans to extend functionality beyond listener management and session passing. But, if you have a feature request or run into any bugs, feel free to hit me up!